Which one is better: Netflix or Amazon Prime?

Should I subscribe to Netflix or is buying an Amazon subscription a better option? This is the question that every one of the fans of the series and movies who always want to see the best and latest work, but with the difference in content between the Netflix account and the Amazon account and due to the great competition between the two companies, it is natural to hesitate before making a decision.

But is the content all that matters? Is it enough to choose a service? Of course, not, there are many factors that must be taken into account, in this article we will compare both services and try to make your choice between buying a Netflix subscription and subscribing to Amazon more easily.

What is the difference between Amazon and Netflix?

Although the two services, Amazon Prime and Netflix, to broadcast video is among the most important competitors on the Internet TV market, there are fundamental differences between them. What is the difference between Amazon and Netflix includes several aspects such as price, content, and a number of other features. 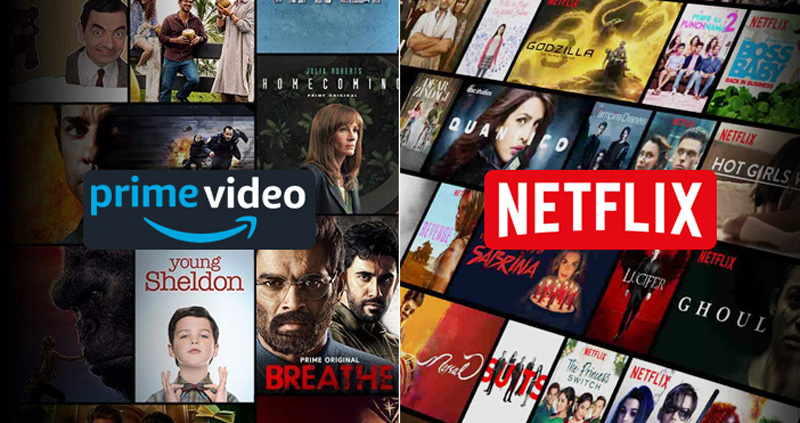 The difference between the subscription price on Amazon and Netflix

If you want to buy a Netflix subscription, you have three options, namely, the basic plan costs $9 per month, the standard plan costs $13 per month, and the premium plan costs $16. Each one of these subscriptions gives you full access to Netflix's entire movie and series library, the difference lies in the number of devices that the plan allows using simultaneously and in the available video resolution.

On the other hand, subscription to Amazon is available with an annual plan for $119 a year or for $13 per month. Of course, in Amazon, the student account gets a discount of about 50%. What you will get in return for the subscription is full access to the video library, the ability to benefit from music services, and some additional features. When shopping.

Netflix has a library that contains thousands of movies, series, and documentaries (varies from country to country), but what is distinguished in it is the collection of exclusive original works such as The Witcher series, Stranger Things, and other works that have been the focus of many admirers during the past years.

On the other hand, Amazon has a larger movie library and also obtains the rights to modern films faster than others. The problem that you can face is that some recent movies are not included in the films that can be accessed through a subscription, but rather require renting or purchasing them separately. Of course, we also have to mention that Amazon Prime has some of its own original works like The Man in the High Castle.

Why is Netflix more expensive than Amazon Prime?

When you compare the price of subscribing to Netflix and the prices of subscribing to Amazon, you will find that Netflix's services are more expensive, but since the two services differ in their offers, some find that the opposite is true, meaning that Amazon Prime is the most expensive. To clarify the matter, we must take into account the exclusive content of Netflix that it finds Some are richer, and we must also not forget that Netflix does not ask you to buy or rent movies, but rather it is content with subscription fees.

Of course, some may argue that subscribing to Amazon Prime enables you to use other services and take advantage of some features when buying from the Amazon store, and also that there are no restrictions on the resolution of movies on Amazon Prime. Here, the matter is in your hands to decide whether the amount of Netflix subscription is exaggerated or not.

Who has more Netflix or Amazon Prime subscribers?

Is Netflix owned by Amazon?

No, Netflix is not owned by Amazon, but what you should know here is that Jeff tried to buy it in 1998, but its owners refused to sell and preferred to stay in the market and compete, for good luck, their decision paid off and their company became the sixth-largest company to provide its services over the Internet.

If you are asking yourself how to open a Netflix account, the answer is simple, all you have to do is go to netflix.com/signup, choose the required subscription plan, and create your account by entering your email and password.

If you are wondering about how to subscribe to Amazon, the steps are simple, you must first go to the link https://www.amazon.com/amazonprime/ and click on Try Prime, then you must enter private information such as your name, email, and choose the subscription plan and payment details